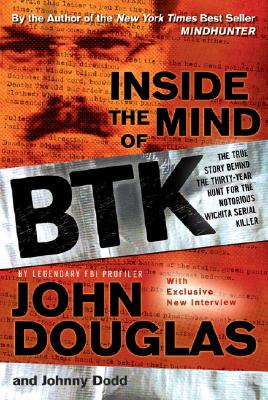 Inside the Mind of BTK

This incredible story shows how John Douglas tracked and participated in the hunt for one of the most notorious serial killers in U.S. history. For 31 years a man who called himself BTK (Bind, Torture, Kill) terrorized the city of Wichita, Kansas, sexually assaulting and strangling a series of women, taunting the police with frequent communications, and bragging about his crimes to local newspapers and TV stations. After disappearing for nine years, he suddenly reappeared, complaining that no one was paying enough attention to him and claiming that he had committed other crimes for which he had not been given credit. When he was ultimately captured, BTK was shockingly revealed to be Dennis Rader, a 61-year-old married man with two children.

John Douglas, a former FBI agent and pioneer serial killer profiler, is one of the most successful true crime authors in the country. He is the author of the New York Times number one best seller Mindhunter: Inside the FBI's Elite Serial Crime Unit, which first introduced the public to the idea of psychological profiles as a tool in hunting down killers. Douglas served as technical advisor for the film The Silence of the Lambs, much of which was based on his work. He has consulted on thousands of cases worldwide providing case analysis, interview and interrogation techniques, investigative strategies, prosecutorial strategies, and expert testimony. Since his retirement in 1995 from the FBI, Douglas has been donating pro bono assistance whenever possible to police and victims of violent crime. Mr. Douglas lives near Washington, D.C. Johnny Dodd is a writer at People magazine who lives in the Los Angeles area.
Loading...
or
Not Currently Available for Direct Purchase