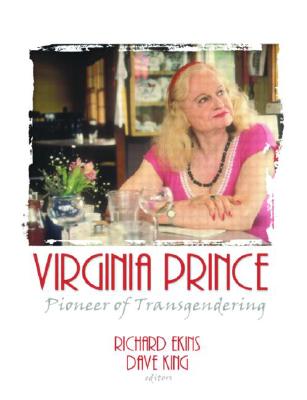 Discover the influence of controversial writer Virginia Prince--friend, counselor, philosopher, and publicist for the cross-dressing community

Virginia Prince: Pioneer of Transgendering documents the life and work of Virginia Prince, whose writings on transvestites and transsexuals influenced the thinking of an entire generation. This unique book gathers and updates her most important--and hard-to-find--articles that chronicle the development of her philosophy over a twenty-year period and provide insight into her role in the creation of a transgender community. The book includes a photo essay by acclaimed photographer Mariette Pathy Allen, a portrait of Virginia at age 92 from Richard F. Docter, and a foreword by celebrated transgender activist, historian, and scholar Susan Stryker.

A staunch promoter of heterosexual transvestism since the late 1950s, Virginia Prince has had a powerful impact on the transgender community. She was the first person to establish a systematic organizational structure that provided a safe setting for transvestites and transsexuals to "come out," and her advocacy of a "transgenderist" position since the late 1960s constituted a major conceptual and identity innovation. These articles focus on issues of sex, sexuality, and gender and serve as a foundation for what later became "transgender studies" in the 1990s.

"The world that we live in is highly polarized and highly stereotyped into femininity and masculinity. What I would like to have you think about is the word in the middle-humanity. A man who wants to look after babies is only being a human being in dealing with young offspring. It has nothing to do with his being a male and not a female, and that is the problem in this area of sex and gender. This high degree of polarization in our society leads to all kinds of confusion in our culture. We must learn that being a person is more important than being either man or woman, male or female."
--Virginia Prince, "Sex vs. Gender"

Virginia Prince: Pioneer of Transgendering is an invaluable resource for academics working in the field of transgender studies and an important historical document for members of the transgender community.