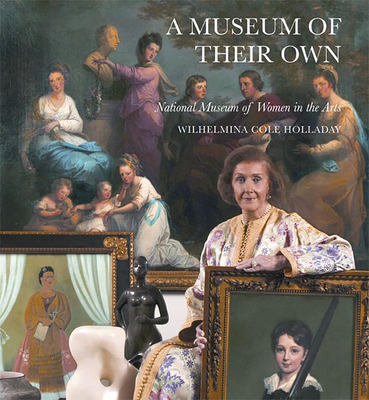 A Museum of Their Own

National Museum of Women in the Arts

An inspiring memoir relating how Wilhelmina Cole Holladay succeeded in founding and establishing the best-known museum devoted to women in the arts.

Over the centuries, until quite recently, the work of great women artists had been ignored, forgotten, or denied; they had been largely left out of museums and histories of art. Along came Wilhelmina Cole Holliday, who boldly decided it was time to rectify this oversight by founding a museum in 1987 in a landmark building near the White House. A critic for the Washington Postwrote, “Wilhelmina Cole Holladay, the museum’s founding president, has accomplished something radical. No player in the art scene here has a deeper understanding of power and money and of how our system works. Despite her white-glove graciousness, hard-working Billie Holladay is a warrior and a winner…”

This thrilling story of the birth and early years of the NMWA is a lively, anecdotal, behind-the-scenes, eyewitness glimpse of the efforts of dedicated individuals who shared Mrs. Holladay’s vision and, under her leadership, helped her expand the permanent collection, organize outstanding exhibitions, renovate the Museum, and fund a robust endowment. Moreover, NMWA now boasts a growing membership—among the top ten museums in the world—with active, vocal committees all across the nation and in many countries. Illustrating the text are 130 color pictures, which include works from the collection and from exhibitions, as well as 40 archival photographs of landmark events that led to the Museum’s impressive growth

Wilhelmina Cole Holladay, the founder and Chair of the Board of the National Museum of Women in the Arts, was elected to the National Women's Hall of Fame and was awarded the National Medal of Arts and the Legion of Honor from the French government. She lives with her husband, Wallace, in Washington, D.C.
Loading...
or
Not Currently Available for Direct Purchase