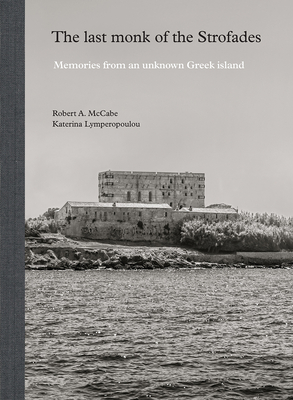 The Last Monk of the Strofades

Memories from an Unknown Greek Island

The story, in photographs, of the last caretaker of the ancient monastery on the remote, windswept Strofades islands—an architectural and historical treasure now in danger of destruction

The Strofades: two small, flat, windswept islands rising out of the Ionian Sea, known to the ancient Greeks as the home of the terrible Harpies, and to most modern Greeks simply unknown. On the larger of the two islets, Stamfani, stands a massive fortified monastery, founded as early as the thirteenth century, for centuries a refuge for honest seafarers and a target for pirates and Turkish raiders. In its heyday, this imposing compound was home to some forty farmer-monks, who kept the entire island under cultivation; by 1976, it was home to just one, Father Gregory Kladis (1937–2017), who alone tended the monastery until 2014. Today the monastery—badly damaged by an earthquake in 1997—lies empty and in danger of ruin.

This book is intended to tell the world about the Holy Monastery at Strofades, and encourage its preservation. At its core are the words of the last monk himself, Father Gregory, who guides the reader through his historic monastery—its chapels, refectory, mills, bakehouse, and living quarters—and the natural beauties of its island setting, as depicted in Robert McCabe’s superb photographs. The testimonies of the boatman who brought Father Gregory his supplies, as well as the lighthouse keeper who was once his only companion on the island, lend texture and context—as do essays on the history, geology, and architecture of the Strofades, and architectural drawings that reconstruct the monastery’s phases of construction.

Nobody who peruses this volume—the result of a yearslong collaboration between more than a dozen researchers and friends of the Strofades—will be able to forget the islands’ last monk, or be unmoved by the plight of his monastery.

Robert A. McCabe was born in Chicago in 1934. He started taking photographs in 1939 with a Kodak Brownie given to him by his father, who published a tabloid newspaper in New York. His work is featured in a permanent exhibition at the Greek consulate in Boston, MA. McCabe’s fifteen published photo books include the Abbeville titles Mykonos, Mycenae: From Myth to History, The Ramble in Central Park: A Wilderness West of Fifth, and Three Days in Havana.

Katerina Lymperopoulou has more than three decades of experience as a journalist for the leading newspapers in Greece. Her marriage to a native of Zakynthos has connected her closely with the Ionian islands and the Strofades.
Loading...
or
Not Currently Available for Direct Purchase