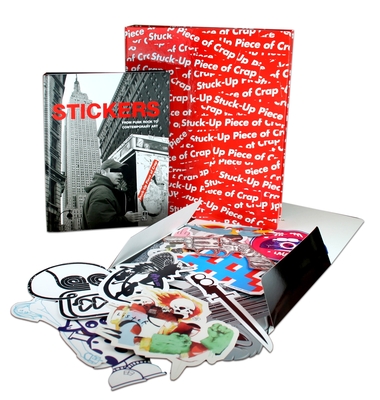 From Punk Rock to Contemporary Art

Stickers features approximately 4,000 stickers from the exploding, vibrant world of street art, DIY culture, music, and branding. Cheap, democratic, easy to "tag," and not always fast to fade, the sticker has been an ever-present medium—from the New York and London underground punk scene to skate culture and political expression. Celebrating the graphics of this street-art medium, Stickers illustrates the timeline of this pastime, from counterculture to politics. Stickers includes approximately 4,000 sticker graphics organized by categories and themes, with works by such diverse artists as Raymond Pettibon and Jenny Holzer; street artists such as Banksy, Neck Face, and Barry McGee; and amateur artists who "tag" the streets anonymously. With texts from artists and writers, including Swoon, Stanley Donwood, ESPO, Clayton Patterson, Carlo McCormick, and Michael Betancourt, Stickers illustrates not only the visual and social history of sticker art but also the personal relationship that street artists and pedestrians alike have with stickers. Packaged in an oversized clamshell box, the deluxe edition features 23 large, original die-cut stickers, many of which are signed by the artist.

Praise For Stickers Deluxe: From Punk Rock to Contemporary Art…

"Stickers, long the currency of prepubescent girls, also have a protracted history as the emblem of pre-Internet subcultures, from skate to rave to hip-hop and everything in between. DB Burkeman, a 40-something ex-rave D.J. and music industry A&R man, has amassed an impressive trove and brings them together in Stickers: From Punk Rock to Contemporary Art ($35; Rizzoli). And there is nary a unicorn or a rainbow in the bunch." ~New York Times, T Magazine Blog

"For DB Burkeman, stickers are those little markers that document our culture. Whether it's the first 'Watch out! Punk is coming!' sticker slapped up on the Lower East Side in late 1970s or a 1930s R. Stanton Avery silk-screened political bumper sticker, they capture a point in time that somehow defined American culture. So it only makes sense that Burkeman, along with his partner, Monica LoCascio, got to researching the art of stickers and churned out Stickers: From Punk Rock to Contemporary Art. The 300-page book traces the visual and social history of the medium, and explores the relationship artists have with their pieces and how they communicate with viewers." ~MTV.com

DB Burkeman fell in love with stickers and street art at an early age via skateboarding and punk rock, but made a name for himself DJing between his homes in London and New York.

Shepard Fairey is an artist and graphic designer who is known around the world for his "Andre the Giant Has a Posse" sticker campaign and the Barack Obama "Hope" poster.

Carlo McCormick is a curator, cultural critic, and the author of numerous books. He is the senior editor at Paper Magazine.
Loading...
or
Not Currently Available for Direct Purchase