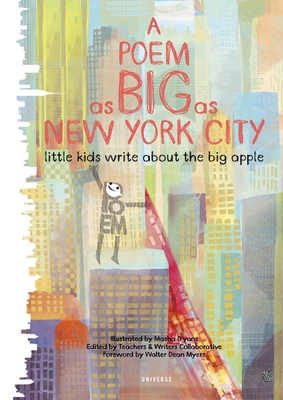 A Poem as Big as New York City (Hardcover)

In the best-selling tradition of This is New York and My New York, this delightful book-length poem spreads the wonder and joy that is New York, as told through the words of its children. As part of an unprecedented series of workshops, New York City public school students were challenged to write about what it was like to live, learn, and play in New York City. The poems were collected and edited into this book. Their words provide readers of all ages an honest, kid’s-eye view of the melting pot of cultures, ideas, and excitement found within the five boroughs of New York City.

Masha D’yans’s beautiful illustrations complement the vivid descriptions of taking a taxi through Manhattan or a subway up to the "boogie-down" Bronx, the salty seas of Staten Island, passing the family-owned stores that form the backbone of Queens, walking through Brooklyn’s Botanical Gardens, and so much more.

Lyrical, heartfelt, and bursting with imagination, A Poem as Big as New York City proves that a poem can be as vast and exciting as the greatest city in the world.

Teachers and Writers Collaborative provides and advocates for literary arts education by supporting, developing, and implementing strategies to enhance students’ interest in and love of literature and writing. Masha D’yans is a celebrated artist whose work has been featured in books, calendars, and merchandise created specifically for the Museum of Modern Art. Walter Dean Myers is the award-winning author of more than fifty books for children and young adults and is the national ambassador for young people’s literature.

Praise For A Poem as Big as New York City: Little Kids Write About the Big Apple…

"The book includes 74 color illustrations...that reflect the playfulness and whimsy of the children’s poetry. Together, images and words dance, jump, and stroll down crowded sidewalks, taking readers from the South Street Seaport to The Apollo Theater and everywhere in between." ~nymetroparents.com

"I was truly amazed by this book. You can hear the multitude of individual voices coming together as one.....The children describe their city in both poetic and truly child-centered terms." ~greatkidbooks.blogspot.com

"This homage to New York City is the brainchild of the nonprofit Teachers & Writers Collaborative, which asked children throughout the five boroughs to write about their city. Their observations are integrated into a single poem that reflects on neighborhoods, landmarks, and what it means to be a New Yorker...ethereal paintings depict glassy skyscrapers, streets dense with people, and a childlike personification of a poem constructed of text. A mosaic as dynamic as its subject. Ages 5-up." ~Publisher's Weekly

"We can’t think of a more vibrant way to see the five boroughs from a kid’s perspective, and for parents and children to be inspired to share their take on city life." ~New York Family

"The poem, both written on the pages and personified in art, is an exhilarating read and the result of an innovative series of writing workshops in the city’s public schools. The result was a melding of perspectives, descriptions, alliterative verse and sound words into a poem that feels almost as big and bold and diverse as the city itself…” ~Wherethebestbooksare
or
Not Currently Available for Direct Purchase
Copyright © 2020 American Booksellers Association