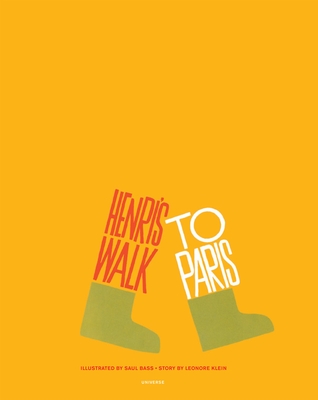 Henri’s Walk to Paris is the story of a young boy who lives in Reboul, France, who dreams of going to Paris. One day, after reading a book about Paris, he decides to pack a lunch and head for the city.

“Like many of us Henri wants to see Paris.

In Paris, there are thousands of buses. In Reboul, where Henri lives, there is only one bus.

Along the way, Henri gets tired and falls asleep under a tree. And this is when the story gets really charming. What Henri sees, we see, in a flowing panorama of pictures conceived by the eminent graphic designer Saul Bass.

Praise For Henri's Walk to Paris…

"No question, this is the kind of children’s book that arty parents like to display in their Dwell-decorated nurseries. But it’s also the kind of book that will stir a wandering spirit in imaginative children. Klein’s delightful text, like Bass’s bold graphics, is spot on." ~The New York Times

"During his journey, he stops for a rest, and inadvertently gets turned around, resulting in a clever ending that will leave kids chuckling and thinking about the true value of home. Filled with dazzling sun-bright colors, broad lines, and geometric shapes, the graphic artwork is crisp and imaginative. Characters and objects are depicted through eye-pleasing outlines and silhouettes, and the text is inventively integrated into the illustrations. Beginning with the cover, showing Henri's stepping shoes, the story's sense of motion is creatively conveyed through the visuals. In addition to its child appeal, this book may also be of interest to collections that focus on the history of children's literature and illustration." ~School Library Journal

Saul Bass (1920–1996) was a celebrated American graphic designer and filmmaker, but he is best known for his design on animated motion-picture title sequences. During his forty-year career he worked for some of Hollywood’s greatest filmmakers, including most notably Alfred Hitchcock, Otto Preminger, Stanley Kubrick, and Martin Scorsese. Among his most famous title sequences are those for Preminger’s The Man with the Golden Arm, and Hitchcock’s North by Northwest and Psycho. Leonore Klein wrote the children’s books What Would You Do If . . . (1956), Mud, Mud, Mud (1962), Brave Daniel (1966), and Only One Ant (1971), among many others. Besides writing books for children, Klein was a librarian in New York.
Loading...
or
Not Currently Available for Direct Purchase