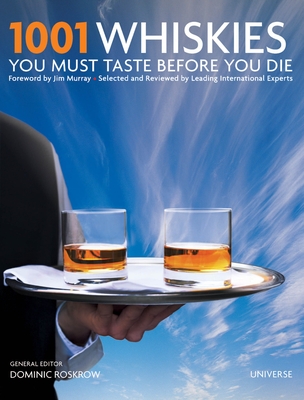 1001 Whiskies You Must Taste Before You Die

This latest volume in the hugely popular 1001 series supplies the connoisseurs’ scoop on the finest spirits from the Scottish highlands to the exotic new whiskies emanating from Japan and the evolving world of American micro-distilleries. The book also covers bourbons and ryes, making this the go-to volume for the serious whisky connoisseur as well as the passionate beginner.

This essential guide represents the collective, subjective wisdom of an international team of critics who winnow the world of spirits down to the “must-try” whiskies—from high-quality, mass-produced brands to small-batch specialty bourbons from micro-distilleries. Each entry includes critical tasting notes, a history of the distillery, and temperature recommendations.

From grain to glass, everything important is covered—including storing and serving whiskies, making whisky cocktails, and pairing whisky with food—making this the most important illustrated exploration of whisky published in years.

Praise For 1001 Whiskies You Must Taste Before You Die…

"Editor Dominic Roskrow knows what he’s talking about. He was the editor of Whisky Magazine for several years and has a written a few other well-respected books on humanity’s finest beverage. " ~Werd.com

"Crisp bottle photographs, old-school advertisements, and a healthy blend of rye, bourbon, and emerging trend knowledge make for one heady read. Between tasting notes and distillery tours, Roskrow’s liquor and food industry friends from around the globe weigh in on topics like 18th-century United Kingdom label feuds and futuristic techniques emanating from (where else?) Japan." ~DailyCandy.com

"We don't recommend trying them all at once — or even over the course of a month — but should you make it through all the varied selections in 1001 Whiskies You Must Taste Before You Die ($25), you'll no doubt be a more well-rounded drinker." ~Uncrate.com

Dominic Roskrow is the author of The World’s Best Whiskies and also edits Whiskeria, the world’s biggest whisky magazine. He has written for Whisky Magazine (where he was editor for four years), Harper’s, Drinks International, Malt Advocate, and Rupert Murdoch’s new iPad newspaper, The Daily. In 2007, he was awarded the highest Scotch whisky honor when he was made a Keeper of the Quaich, and in 2010 he was made a Kentucky Colonel, Kentucky’s highest award.
Loading...
or support indie stores by buying on