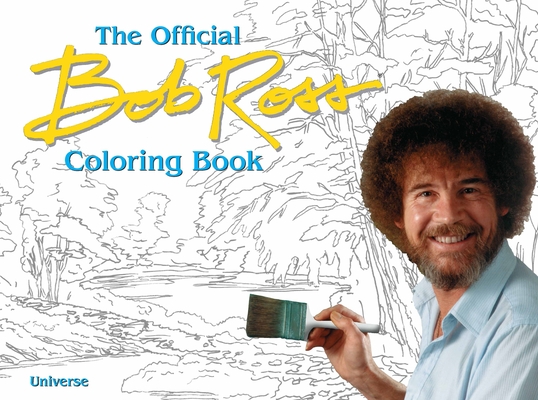 The first and only coloring book based on the art of the beloved and acclaimed painter and television personality. This exclusive authorized collection of art, derived directly from Bob Ross’s own paintings, offers his legions of fans a contemplative, relaxing, and inspiring way to connect with the work and personality of the pop-culture icon.
Featuring many of Ross’s most famous quotes and catchphrases about happy little trees, friendly squirrels, and more, the book also includes a gallery of his original artwork. But as he would no doubt want, coloring fans of all ages are encouraged to make their own decisions, embrace their mistakes, and make each painting their own.
Bob Ross is a cult figure around the world among varying age groups, especially Generation X. And everyone agrees he is about more than just painting. His fans—few of whom identify themselves as artists—agree that his quiet, nurturing disposition is a form of therapy, making his work the absolutely perfect subject of an adult coloring book. This coloring book presents more than seventy-five line drawings created from Ross’s own artwork.

Bob Ross (1942–1995) was an American painter, art instructor, and the creator and host of PBS’s The Joy of Painting, an instructional painting technique television series that originally ran from 1982 until 1994.

"The Bob Ross Coloring Book (Universe) is the first authorized coloring book based on Ross’s artistic archive. Ross, who would have turned 75 later this year, was all about giving his fans the confidence to pursue art even without extensive training. “There’s an artist hidden at the bottom of every single one of us,” the gentle genius said. So what better way to honor his memory than to relax with his coloring book?"
—Mental Floss

"27 Cheap Things To Treat Yourself To Right Now"
—Buzzfeed

"There's Now A Bob Ross Coloring Book And It'll Make You Want To Color All The Happy Little Trees"
—Throwbacks.com

"Either way, a new coloring book has hit the market that you’re going to want to snatch up ASAP: 'The Bob Ross Coloring Book.' "
—Simplemost.com
or
Buy Here
(This book is on backorder)
Copyright © 2020 American Booksellers Association