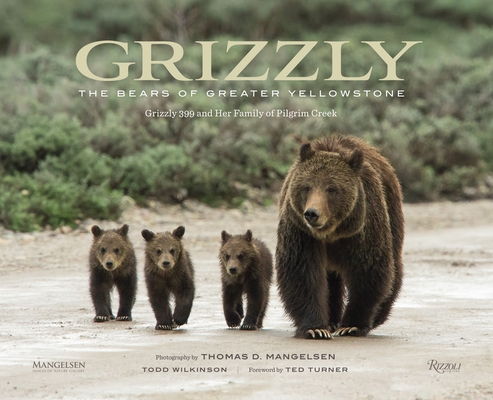 The Bears of Greater Yellowstone

Renowned photographer Thomas D. Mangelsen’s latest project focuses on a celebrated Yellowstone grizzly bear family, which he has been tracking and photographing for ten years. ﻿The grizzly bears of Yellowstone and Grand Teton National Parks are the most famous wild bruins in the world. Millions of people and generations of travelers annually make special pilgrimages to the northern Rockies just to catch sight of these powerful, breathtaking animals. But like a lot of large predator populations on earth, grizzlies in the lower 48 states have struggled for survival.
In Grizzly, renowned nature photographer Thomas D. Mangelsen and environmental writer Todd Wilkinson team up to tell the inspiring if sometimes harrowing story of a remarkable bear clan: Mother Grizzly 399 and her generations of offspring. While tracking this charismatic band of bears, Mangelsen has amassed an incomparable photographic portfolio that offers an intimate glimpse into the lives of this celebrated bear family. The rescue of Yellowstone grizzlies ranks as one of the greatest feats of wildlife conservation.


WINNER 2016 - Outdoor Writers Association of America - Book of the Year

Praise For Grizzly: The Bears of Greater Yellowstone…

“Tom Mangelsen is a photographic genius at bringing nature’s greatest creatures into our lives—and his work with the magnificent grizzly bears of the American West is a gift for all generations. We have grizzly visitors in Montana—usually a mama and a pair of cubs—and their presence stirs the soul for they are the essence of wild. Tom’s photographs and Todd Wilkinson’s narrative capture all of that without the need to find an escape route!”
—Tom Brokaw

“Grizzly is an unforgettable book—their survival is in our hands.”
—Jane Goodall

“When fishing by the Oxbow Bend of the Snake River early in the morning, I often see Tom Mangelsen, with his long lens, documenting the life of charismatic Mama Bear 399. She and her cubs have passed through my backyard every fall on their way to pick berries and chokecherries. Their presence turned my walks into memorable adventures. Tom’s stunning photographs and Todd Wilkinson’s masterful storytelling are now giving the world that same sense of adventure.”
—Yvon Chouinard, conservationist, adventurer, and founder of Patagonia, Inc.

“Thanks to Tom Mangelsen’s spectacular photography and Todd Wilkinson’s gripping text, the number 399 has been transformed from a meaningless integer into the identity of an iconic grizzly who, over her long lifetime in Grand Teton National Park, has thrilled thousands of park visitors, and has proved that these great bears and humans can peacefully coexist.”
—Paul Johnsgard, Foundation Professor of Biological Sciences Emeritus, University of Nebraska-Lincoln and author ofYellowstone Wildlife: The Ecology and Natural History of the Greater Yellowstone Ecosystem

“No animal speaks to the essence of the still-wild American West more powerfully than the grizzly does. And no book speaks to our archetypal fascination with the Great Bear more movingly than this book. I've known Tom Mangelsen for decades, admire his wizardry with a camera and am grateful to call him a close dear friend. I've also followed Todd Wilkinson's environmental writing for a long time and consider him a friend. Together, they have assembled a remarkable book in images and words about the life and times of a bear family that has no match.”
—Gerry Spence, legendary American trial lawyer, author, photographer and social commentator

"Photographer Thomas Mangelsen is renowned for his stunning photographs of the world's wildlife and exotic locales . . . This large-format book is an empathetic and moving tribute to the more-than-human world."
-CASADIA WEEKLY

Thomas D. Mangelsen is among the most distinguished natural history photographers in the world, and his honors include being named Conservation Photographer of the Year by Nature’s Best Photography. His work has been published widely, including in National Geographic and American Photo, as well as exhibited in museums and galleries. Todd Wilkinson is a professional journalist and the author of several books, including the critically acclaimed Science Under Siege: The Politicians’ War on Nature and Truth. Ted Turner, an entrepreneur and media mogul, has made his mark as one of the most influential philanthropists in the United States over the past several decades. His foundations are dedicated to securing a safer, healthier future for our planet by addressing wildlife conservation, among many other causes.
Loading...
or
Not Currently Available for Direct Purchase