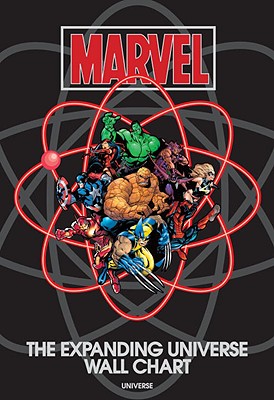 The Marvel universe--that amazing, multiplanar realm inhabited by Spider-Man, Captain America, the X-Men, and other legendary Marvel Comics characters--has until now existed solely in a metaphoric state. For the first time, the scope and breadth of the entire Marvel universe is visible in a one-of-a-kind graphic representation. Marvel: The Expanding Universe Wall Chart--part decorative poster, part insightful history, part reference work, and part interactive fun--is unlike anything else in the literary marketplace. With contributions from the finest comic book artists of the last two centuries, this unique book and chart creates a pictorial tapestry of more than 300 Marvel Comics characters. With an interior expanding to 12 feet by 3 1/2 feet and custom, three-dimensional art on the cover, Marvel: The Expanding Universe Wall Chart will not only be cherished for its content, but it will also be a visually stunning addition to any Marvel fan's collection.

A must-have for any comic collector, this expanding pictorial tapestry of more than 300 Marvel Comics characters demonstrates how the characters and their individual universes interconnect.

Michael Mallory is the author of X-Men: The Characters and Their Universe and Marvel: The Characters and Their Universe, as well as 400 magazine and newspaper articles chronicling a variety of topics. Internationally recognized as an authority on animation, Mallory frequently appears on radio and television venues, including E! Entertainment Television and the BBC. He lives and works in Southern California.
Loading...
or
Not Currently Available for Direct Purchase