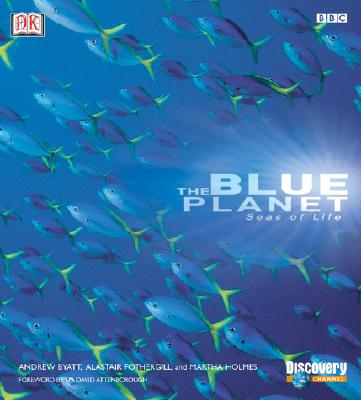 "From space, Planet Earth is blue. It floats like a jewel in the inky black void. The reflection of the sun's light from the vast expanse of water covering its surface creates it gemlike blue color. In the entire solar system, Earth is the only planet that has water in liquid form in such quantities." Scientist have calculated that 70 percent of our planet is covered by water; small wonder that the human being shave always been so fascinated by the oceans and what lies beneath. Today, while we still have so much more of the ocean realm to uncover, we have discovered enough to know that beneath the waves lies a vast treasure-trove of rich and diverse life. Accompanying the television series of the same name, The Blue Planet leads up on a voyage of exploration from the coasts, the very edges of the oceans, to the deep where weird and monstrous fish lurk in a world of perpetual darkness. Along the way we are introduced to a whole host of wonderful creatures -- from tiny copepods to majestic blue whales, and from the grotesque hairy anglerfish, to the amazing tripod fish that stands on its three delicate legs waiting to snap up unsuspecting prey. Complete with a foreword by Sir David Attenborough and 400 full-color photographs, The Blue Planet is the first complete and comprehensive portrait of the whole ocean system.

Alastair Fothergill was educated at the universities of St. Andrew's and Durham in the UK, joining the BBC Natural History Unit in 1983. He has worked on a wide range of the department's programs, including the award winning The Really Wild Show, Wildlife on One, and the innovative Reefwatch. He worked with Sir David Attenborough on The Trials of Life and again, in 1993, when he produced Life in the Freezer, for which he also wrote the accompanying BBC book. In 1992 he was appointed head of the BBC Natural History Unit. In June 1998 he stepped down as head of the unit in order to concentrate on his role as series producer of The Blue Planet TV series. Martha Holmes specialized in marine biology and gained her Ph.D. at the University of York in UK. She started work with the BBC in 1998, presenting programs such as Reefwatch, a live underwater broadcast from the northern Red Sea, and The Natural World: Splashdown, which was followed by the award-winning wildlife adventure series Sea Trek, for which she wrote the accompanying BBC book. She worked in Antarctica for Sir David Attenborough's Life in the Freezer and has produced a number of other natural history films, such as Hippos out of Water, Deadly Liaisons, Otters -- The Truth and Reefwise. More recently, she produced the groundbreaking and BAFTA-winning film Wildlife Special: Polar Bear. She joined The Blue Planet team as a producer in 1997. Andrew Byatt began working with the Natural History Unit in 1989 as a safety diver for The Natural World: Splashdown. He has been highly acclaimed for his work on several Wildlife on One programs, including the award-winning film on jellyfish, The Swarm. More recently, Andrew has produced two films for Incredible Journeys on gray whales and rattlesnakes, and has co-produced Wildlife Special: Humpback Whales. He joined The Blue Planet team as a producer in 1997.
Loading...
or
Not Currently Available for Direct Purchase