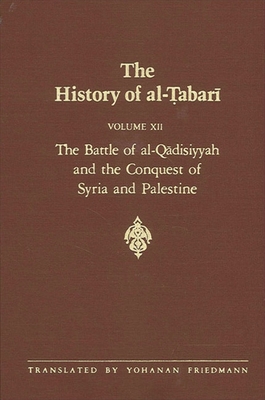 The History of Al-Tabari Vol. 12 (Paperback)

The present volume of the History of al-Tabari deals with the years 14 and 15 of the Islamic era, which correspond to A.D. 635-637. The nascent Islamic state had just emerged victorious from the crisis that followed the Prophet's death in 632 and had suppressed what was known as the riddah ("apostasy") rebellion in the Arabian peninsula. Under the leadership of 'Umar b.'al-Khattab, the second caliph, or successor to the Prophet Muhammad, the Muslims embarked on the conquests that would soon transform the whole of the Middle East and North Africa into an Arab empire. Most of the present volume describes the battle of al-Qadisiyyah, which took place on the border between the fertile Iraqi lowlands (al-sawad) and the Arabian desert and resulted in the decisive defeat of the Persian army. The Muslim victory at al-Qadisiyyah heralded the downfall of the Sasanian dynasty, which had ruled Persia and Mesopotamia since A.D., the third century; it also paved the way for the conquest of Iraq and facilitated Islamic expansion in Persia and beyond. The volume also deals with the conquest of Syria and Palestine and the Expulsion of the Byzantines from those regions. Particular attention is devoted to the traditions related to the conquest of Jerusalem at the hands of 'Umar b. al-Khattab, the first Muslim prayer on the Temple Mount, and its transformation into an Islamic sanctuary. The volume contains colorful descriptions of the various battles, expatiations on the bravery of the Muslim warriors, and portrayals of the futile negotiations between the parties before the beginning of hostilities. It thus provides the reader with a fascinating insight into the later Muslim traditions related to those crucial events of early Islamic history.
or
Not Currently Available for Direct Purchase
Copyright © 2020 American Booksellers Association