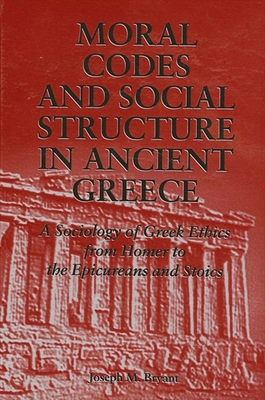 An exercise in cultural sociology, Moral Codes and Social Structure in Ancient Greece seeks to explicate the dynamic currents of classical Hellenic ethics and social philosophy by situating those idea-complexes in their socio-historical and intellectual contexts. Central to this enterprise is a comprehensive historical-sociological analysis of the Polis form of social organization, which charts the evolution of its basic institutions, roles, statuses, and class relations. From the Dark Age period of "genesis" on to the Hellenistic era of "eclipse" by the emergent forces of imperial patrimonialism, Polis society promoted and sustained corresponding normative codes which mobilized and channeled the requisite emotive commitments and cognitive judgments for functional proficiency under existing conditions of life. The aristocratic warrior-ethos canonized in the Homeric epics; the civic ideology of equality and justice espoused by reformist lawgivers and poets; the democratization of status honor and martial virtue that attended the shift to hoplite warfare; the philosophical exaltation of the Polis-citizen bond as found in the architectonic visions of Plato and Aristotle; and the subsequent retreat from civic virtues and the interiorization of value articulated by the Skeptics, Epicureans, and Stoics, new age philosophies in a world remade by Alexander's conquests--these are the key phases in the evolving currents of Hellenic moral discourse, as structurally framed by transformations within the institutional matrix of Polis society.

Joseph M. Bryant is Associate Professor of Sociology at the University of New Brunswick, Canada.
or support indie stores by buying on
Copyright © 2020 American Booksellers Association