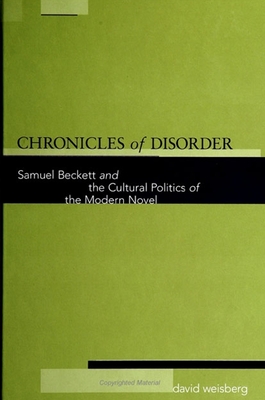 Samuel Beckett and the Cultural Politics of the Modern Novel

Offering a striking new interpretation of Beckett's major fiction, Chronicles of Disorder demonstrates how Beckett's career as a writer developed in relation to the most enduring twentieth-century beliefs about the social function of literature, language, and narrative. Weisberg explores Beckett's emergence as a major novelist and intertwines sharp analyses of the relations between narrative form and social content in the key works of the Beckett canon. He considers how and why Beckett's work has become ahistorically--and incorrectly--subsumed into poststructuralist-inspired claims about language and narrative ideology, and he uses Beckett as a case study for tracing out the genesis of the opposition of "autonomous" and "committed" art, and how this opposition influenced the canonization of modernism in the 1950s and 1960s.

David Weisberg is Assistant Professor of English at Wesleyan University.
Loading...
or
Not Currently Available for Direct Purchase