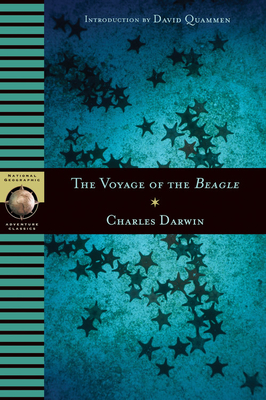 The Voyage of the Beagle (National Geographic Adventure Classics) (Paperback)

Charles Darwin’s theory of evolution and natural selection has been debated and disparaged over time, but there is no dispute that he is responsible for some of the most remarkable and groundbreaking scientific findings in history. His five-year trip as a naturalist on the H.M.S. Beagle took him on a journey to such exotic locales as Chile, Argentina, and the Galapagos Islands. Darwin wrote the details of this expedition, including his thoughts about the people on the ship and of course, his observations of the flora and fauna, in his journal, published as Voyage of the Beagle. It is here that his original interpretations of the Galapagos ecosystem and the impact of nature and selection are first revealed.

This edition of the classic travel memoir is enhanced with an introduction by bestselling nature writer David Quammen, and is part of National Geographic’s major cross-platform event in spring 2009 to celebrate the anniversary.

Charles Darwin’s (1809-1882) love of natural history led him to the Beagle. Twenty years after his voyage, his landmark work On the Origin of Species sparked immediate controversy and has continued to do so for 150 years.

David Quammen is an acclaimed natural history writer and the author of The Song of the Dodo, The Reluctant Mr. Darwin in addition to nearly a dozen other books.
or
Not Currently Available for Direct Purchase
Copyright © 2020 American Booksellers Association