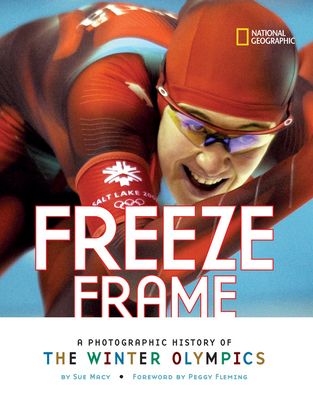 A Photographic History of the Winter Olympics

This companion volume to the highly acclaimed Swifter, Higher, Stronger: A Photographic History of the Summer Olympics follows the stunning visual format of the first book to capture the heroics of the Winter Olympics. From the unlikely Jamaican bobsled team to the unforgettable U.S.S.R. vs. U.S.A. hockey clash at Lake Placid, all the legends of great winter sports are recalled, including stars of skiing, bobsledding, ice skating and even snowboarding.


The book recounts the triumph and tragedy that has enthralled the world since the Winter Olympics were launched in Chamonix in 1924: from Eric Heiden's 1980 five gold medal haul to the horror of the 1961 plane crash that claimed 18 members of the U.S. figure skating team.


Freeze Frame features spectacular photo galleries in addition to a superb map of Winter Olympic sites, an insight into the coverage of new extreme Olympic sports, and a complete Winter Olympic Almanac, which includes quick reference information on each Olympiad.

Sue Macy lives in Englewood, NJ. She is the award-winning author of Winning Ways: A Photohistory of American Women in Sports and A Whole New Ball Game: The Story of the All-American Girls Professional Baseball League. Both were named ALA Best Books of Young Adults and NCSS-CBC Notable Children's Trade Books in the Field of Social Studies.
or
Not Currently Available for Direct Purchase
Copyright © 2020 American Booksellers Association