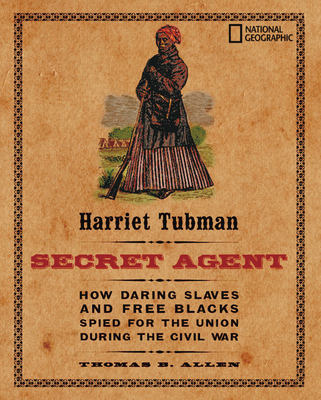 By Thomas B. Allen

It's 1863. Harriet Tubman is facing one of the biggest—and most dangerous— challenges of her life. She has survived her master's lash, escaped from slavery, and risked her life countless times to lead runaway slaves to freedom along the Underground Railroad. Now she has a new role—that of Union spy! The outcome of a secret night raid deep into Confederate territory depends on the accuracy of the intelligence she and other black spies have gathered. Success will mean freedom for hundreds of slaves. Failure will mean death by hanging.

You are about to enter the undercover world of African-American spies—enslaved and free—risking everything in the name of freedom. How were the Underground Railroad and slave songs used to pass secret messages? What were "contrabands" and "Black Dispatches?" What did Harriet have in common with the Secret Six and a maidservant in the home of Confederate President Jefferson Davis? You'll discover these answers and more as the action unfolds.

Thomas B. Allen, author of the award-winning George Washington, Spymaster, has sifted through military and intelligence archives, diaries, and little-known memoirs from ex-slaves to bring to light new facts about the role Harriet and other black spies played in helping the Union win the war.

Thomas B. Allen is the author of the award-winning book, George Washington, Spymaster: How the Americans Outspied the British and Won the Revolutionary War. He is the co-author with Norman Polmar of Spy Book: The Encyclopedia of Espionage; Code-name Downfall; and Merchants of Treason, a report on modern espionage. He is also the co-author, with Paul Dickson, of The Bonus Army. Tom Allen lives in Bethesda, Maryland. You can visit him on the Web at www.tballen.com.

Carla Bauer is a woodcut illustrator whose work has been exhibited in the National Academy of Design. She lives in New York City.
or
Buy Here
Copyright © 2020 American Booksellers Association