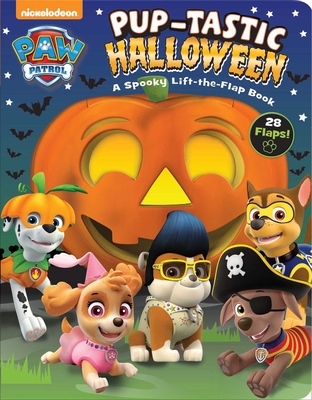 Plan for Halloween with Ryder, Chase, Marshall, and the rest of the PAW Patrol in this flap book that includes 24 flaps throughout!

Halloween is coming and Ryder can hardly wait! Kids can join Chase, Marshall, Skye, and all their friends as they get ready for Halloween in Adventure Bay. Dozens of flap surprises throughout will make this a spooky holiday favorite!

MacKenzie Buckley is the author of the middle-grade fantasy novel Sally's Bones and co-author of the upcoming young reader series Marvel's Super Hero Adventures. She is a trained dramaturge and former editor for Marvel comics. She lives in New York with her family and has at least one totally crazy dream a week.

Jason Fruchter is a contracted freelance illustrator and animator for several media companies and book publishers. He began his career as an animator and illustrator after graduating from the Rhode Island School of Design in 1992. He creates children's book illustrations based on popular kid's TV properties and 2D animation for broadcast, games, apps, and interactive kiosks. In addition to his contracted work, Jason develops original properties for kids' media. In his downtime, he enjoys biking around Elliot Bay near his home in Seattle, WA, and drawing caricatures. He’s currently working on a series of caricatures of the Presidents of the United States.
Loading...
or support indie stores by buying on
(This book is on backorder)