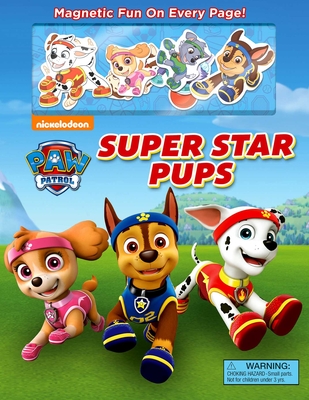 Chase, Skye, and the rest of the PAW Patrol team come to the rescue when an eagle steals the kickball during their charity game against Raimundo’s team! Become a part of the story by setting the scene right on the magnetic book pages with the 8 included magnets of your favorite PAW Patrol pups, and help lend a paw!

Steve Behling is passionate about telling stories. He’s written the completely bonkers junior novel adaptation of the hit film Dora and the Lost City of Gold, the original middle-grade novel Avengers Endgame: The Pirate Angel, the Talking Tree, and Captain Rabbit, and many issues of the official Disney DuckTales comic book, to name just a few. He’s also the creator of That's Believable!, a website full of made-up facts and essential weirdness. Steve lives in a top-secret subterranean lair with his wife, two human children, and three-legged wonder beagle, Loomis.

After graduating from the Art Center College of Design, Mike Jackson started freelancing for all the major studios (i.e. Disney, Warner Bros.) and has worked successfully as an illustrator for over 25 years. His company “MJ Illustrations” includes a small group of very talented people, with a primary focus on children’s books and product package design. Currently located in Santa Fe, New Mexico, he enjoys doing both commercial and fine art in the beautiful environment of the great southwest.
or support indie stores by buying on
Copyright © 2020 American Booksellers Association