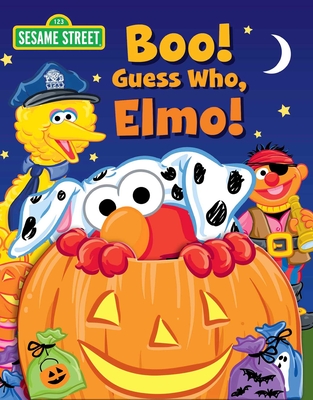 It’s Halloween and Elmo and his friends are all dressed up for trick-or-treating. Who is behind the puppy dog mask? Who is dressed as a pirate? Kids guess who and then find out if they are right when they open the peek-a-boo flaps on each page. Filled with Halloween surprises and delights, this book is spooktacular!

Ernie Kwiat (rhymes with "what") was born in Houston, Texas, and raised near New Castle, in western Pennsylvania. He studied illustration at the School of Visual Arts in New York City before serving in the U.S. Navy. Ernie then earned his MFA, specializing in printmaking, from Mills College in Oakland, California. As art director and designer for a commercial screen-printing company in California, he designed and created graphics for clients including Lucas Films, Hanna-Barbera, Disney, and Sesame Workshop. This led to his next role as art department head of Sesame Street General Stores where he performed as an illustrator and product designer. Ernie currently enjoys working as a freelance illustrator, and in 2019 one of his picture books became a New York Times bestseller.

Matt Mitter was born on a Wednesday afternoon in Oklahoma City and later squandered his youth in and around the Ozarks. Later still, he lived here and there, and now and again did a bit of this and that. Over the past 20 years, he has written the text (mostly verse) for dozens of children's books that have been admired by readers of all ages for their delightful pictures.  Currently, Matt resides in San Francisco, where he and his wife are indentured to two Scottish Folds.
Loading...
or support indie stores by buying on