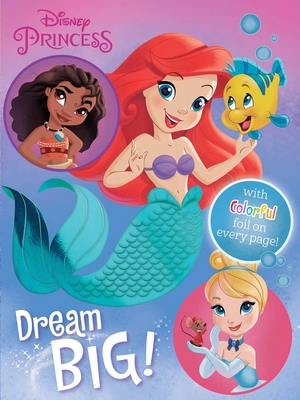 Five Disney Princesses will transform right before your eyes in this storybook with touch-and-feel sequins!

Every Disney princess has faced obstacles when trying to achieve her dreams, but true princesses have the heart to make it through! Ariel was brave in the face of a world that wasn’t her own. Cinderella knew being kind was important no matter the cost. Aurora knew that what’s on the inside is what counts. Moana searched for answers when she didn’t know what to do. And Rapunzel discovered that dreaming only stops when you do! In this book, follow along with a princess on every spread as they work past fear and doubt to make their dreams come true. With rhyming text and 3 sets of colorful reversible sequins—this book tells the story of these princesses in a way that both individualizes and unites them in one resounding idea: being a princess is just about doing your best!

Maggie Fischer is originally from Oregon, but now lives in Seattle, Washington, after receiving her B.A. in English from Gonzaga University. The daughter of a children’s librarian, Maggie has grown up surrounded by books and feels impossibly lucky to write and edit books for kids. She spends her time trying not to get worried about the increasing number of crows in her backyard, petting her enormous cat, Finch, and drinking more coffee than is probably healthy.

Fernando Güell got his artistic talent from his mother, who was an illustrator. He studied at the art academy and became a freelance artist in 1977, doing illustration work for books, toys, and advertisements. He drew comics for the Danish Disney publisher Egmont from 1981 to 1986, using a variety of characters, such as Donald Duck, Hiawatha, Mickey Mouse, and Winnie the Pooh, initially through Bardon Art and later Selecciones. He has also worked at the art department of Disneyland Paris. In 2000, Güell became part-time art director at Egmont, while also illustrating stories and gags with movie characters like "Timon & Pumba," "Junglebook," "101 Dalmatians," mostly scripted by Per Hedman.
Loading...
or
Not Currently Available for Direct Purchase