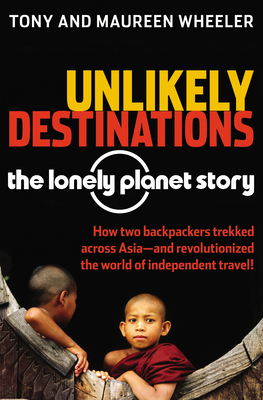 Founders of the phenomenally successful publishing company Lonely Planet, Tony and Maureen Wheeler have produced travel guides to just about every corner of the globe. Lonely Planet Publications was born in 1973 when the Wheelers self-published a quirky travel guide, Across Asia on the Cheap. This was quickly followed by what soon became the backpackers' bible, South-East Asia on a Shoestring. Going boldly where no other travel publisher had ventured, they catered to a new generation of independent, budget-conscious travelers long before the advent of mass tourism. Unlikely Destinations: The Lonely Planet Story is a unique mix of autobiography, business history and travel book. It traces Tony and Maureen Wheeler's personal story as well as the often bumpy evolution of their travel guide business into the world's largest independent travel publishing company. Not surprisingly, after thirty years in the business, the Wheelers have an unrivaled set of anecdotes which they share in Unlikely Destinations: The Lonely Planet Story. They have been hassled by customs, cheated by accountants, let down by writers, banned in Malawi, berated for their Burma guide and had books pirated in Vietnam. Tony has been gored by a cow in Benares, declared dead around the world in an assortment of gruesome and greatly exaggerated accounts and their company has been accused of the "Lonely Planetization" of the world. Through it all, from the heady days of discovery in the '70s to the rocky patch after the September 11th terrorist attacks, the Wheelers' passion for the planet and traveling hasn't diminished and comes shining through in this enthralling travelogue. But above all, their memoir reveals the spirit of adventure that has made them, according to the New York Daily News, "the specialists in guiding weird folks to weird places.

"... a lively autobiography that is as interesting, informative and amusing as their series itself. ...This look back at their almost 40-year career divides neatly into thirds, with the first energetically covering their various travels while they get their business off the ground; ...the second frankly detailing why their early and "often fairly shoddy productions" became popular because they "were still better than anything else around"; and the third refreshingly discussing their current business ventures."—Publishers Weekly

"As spirited and engagingly human as the books that have taught us how and why and where to travel, Tony and Maureen Wheeler's story describes a miracle (from 27 cents to a multi-million dollar empire) that is in its way as inspiring and wondrous as the temples of Pagan or Easter Island's statues. Whether penniless backpackers or heads of a global company, Tony and Maureen somehow always exemplify the very best kind of travelers' enthusiasm and curiosity."—Pico Iyer

"Tony Wheeler, who often sleeps with a laptop stowed under his bed, does the majority of the writing, while Maureen offers welcome sidebars filled with her thoughts about a given situation. Neither shies away from writing about the strain running a company and constant traveling had on their marriage, which at times was rocky or the demands put on the lives of their two children, Tashi and Kieran, who just want to be normal teenagers and hang out with their friends instead of traveling the world."—Chicago Sun-Times

"...the Wheelers include everything from amusing anecdotes, to the struggle for finding the perfect "cliche, but not a cliche" cover photo for their books. The result is a fascinating business success story and the tale of a maturing relationship."—ForeWord Magazine

"A naive young couple sets off across Asia and, somehow, against tall odds, ends up managing a publishing empire that straddles the globe. Therein lies a story. And the story is intermittently funny, full of false stats, frustrations, mistakes and numerous exotic locales. I think this book is ultimately more inspiring than a whole shelf full of self-help screeds. Go ahead, start on page one and follow your bliss."—Tim Cahill

In the 30-plus years since Tony and Maureen Wheeler started Lonely Planet Publications, it has grown to become the world's largest independent guidebook publisher with more than 500 titles in print. The Wheelers spend six months living in Melbourne, Australia and travel the world for the rest of the year.
Loading...
or support indie stores by buying on