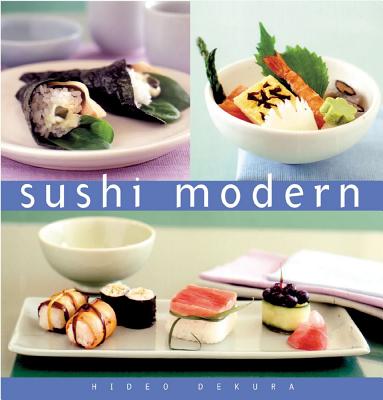 Sushi Modern takes a quintessential Japanese dish and fuses it with flavors from around the world -- with surprising, delicious results. Author Hideo Dekura takes you step-by-step through a tempting array of recipes that will delight experienced cooks and kitchen novices alike. Using the many varieties of traditional sushi as a starting point, Sushi Modern shows how to create new flavor combinations -- and make sushi with ingredients and equipment make preparing sushi a breeze. You'll soon be sampling smoked salmon and asparagus sushi with cream cheese, Parmesan cheese sushi with cucumbers, tomatoes, and an olive oil vinaigrette, or rainbow rolls with arugula, yellowtail, and mango that you've rolled yourself. Inside this sushi cookbook you will find recipes for a myriad of sushi rolls, using everything from grilled sirloin to smoked salmon or cheese to pate. From directions on preparing the perfect sushi rice--and a recipe for black rice--to planning a sushi meal, this sushi recipe book provides all the steps you'll need to make sushi at home. Step-by-step instructions and full-color photographs make it easy for even a beginner to start rolling their own sushi right away. Some of the sushi recipes found in this sushi guide include:

Hideo Dekura heads a very successful catering and cooking consulting company and is a lecturer at a renowned seafood school. He is also the author of several Japanese cookbooks, including The Fine Art of Japanese Cooking, and has produced several cooking videos. Dekura became an expert in Japanese cuisine through years of training in his family's restaurant from his father, where he learned the principles of sushi and kappou-ryori food preparation, cooking, and presentation. Dekura's interests also took him to Europe to study classical French cuisine, and then to England and the United States where he was able to combine his skills in Japanese and European cuisine by working as a food demonstrator in California.
Loading...
or
Not Currently Available for Direct Purchase