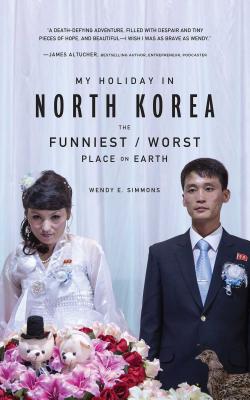 My Holiday in North Korea

The Funniest/Worst Place on Earth

Most people want out of North Korea. Wendy Simmons wanted in.

In My Holiday in North Korea: The Funniest/Worst Place on Earth, Wendy shares a glimpse of North Korea as it’s never been seen before. Even though it’s the scariest place on Earth, somehow Wendy forgot to check her sense of humor at the border.

But Wendy’s initial amusement and bewilderment soon turned to frustration and growing paranoia. Before long, she learned the essential conundrum of “tourism” in North Korea: Travel is truly a love affair. But, just like love, it’s a two-way street. And North Korea deprives you of all this. They want you to fall in love with the singular vision of the country they’re willing to show you and nothing more.

Through poignant, laugh-out-loud essays and 92 never-before-published color photographs of North Korea, Wendy chronicles one of the strangest vacations ever. Along the way, she bares all while undergoing an inner journey as convoluted as the country itself.

Wendy Simmons won’t stop travelling until she visits every country in the world! Despite her hatred for packing, she’s managed to explore more than eighty-five so far—including territories and colonies—and chronicles her adventures on her blog, wendysimmons.com. Wendy is president of Vendeloo, a consultancy she founded in 2001, Chief Brand Officer of a NYC-based global eyewear brand, and an award-winning photographer. She’s also owned a bar in Manhattan, worked for a lobbying firm on Capitol Hill, and written a Japanese-language phrase book. Though her Japanese is now terrible, Wendy’s Pig Latin is flourishing. She graduated summa cum laude and Phi Beta Kappa from George Washington University. Wendy practices Muay Thai daily and lives in Brooklyn in a converted 1800s schoolhouse.
Loading...
or
Not Currently Available for Direct Purchase