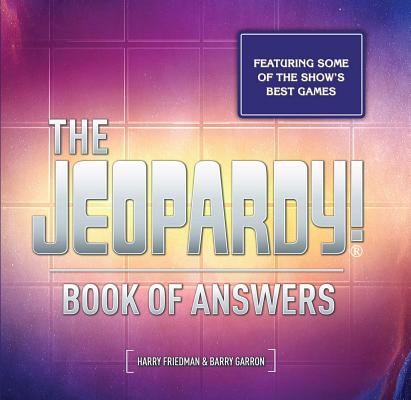 The Jeopardy! Book of Answers (Paperback)

Celebrate the thirty-fifth anniversary of America’s Favorite Quiz Show® with The Jeopardy! Book of Answers.  In honor of this extraordinary milestone, the show’s producers have selected fifteen historic games from over seven thousand episodes that illustrate why the show is every bit as timely—and as lively—as it was the moment that Alex Trebek first took the stage in 1984.

You’ll meet Ken Jennings in his first win, and you’ll be there for the stunning end of his record-breaking run. Experience again the epic battle of Man vs. Machine with IBM’s Watson computer. Follow the Celebrity Invitational Finals with $1,000,000 on the line for charity. Get the play-by-play for championship showdowns, memorable tournaments, and so much more.

Each game includes the complete text of the Jeopardy!, Double Jeopardy!, and Final Jeopardy! rounds along with exclusive behind-the-scenes details and photos. Get to know the contestants, and, for the first time in print, you’ll get untold stories from the staff behind some of our most popular players, games, and competitions.  Who knows? It may even inspire you to become the next Jeopardy! champion! From the very first Jeopardy! episode to the exciting come-from-behind finish of last season’s Tournament of Champions, The Jeopardy! Book of Answers is a must-have for any fan.
or
Not Currently Available for Direct Purchase
Copyright © 2020 American Booksellers Association