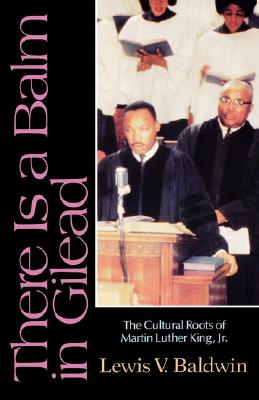 There Is a Balm in Gilead

The sources of Martin Luther King, Jr., 's phenomenal and prophetic impact on life in America and beyond have never been adequately understood. In this path-breaking volume, Lewis Baldwin traces King's vision and activism not to his formal philosophical and theological development but directly to his roots in Southern black culture, where King spent most of his 39 years.

King's appropriation of the Bible, Gandhi, American participatory democracy, Boston personalism, and the theologies of Reinhold Niebuhr and the Social Gospel makes sense, Baldwin argues, only against his visceral and abiding identification with black culture and the black Christian tradition. Working directly with the trove of King's sermons, speeches, and unpublished papers, Baldwin has reconstructed the pain and joy, the defeat and triumph King experienced in his formative family relationships, in the black church, in his childhood and education, in his marriage and children, in segregated black Atlanta, and in his leadership of America's civil rights movement.

Baldwin's through research and engaging writing finally give us what King had but Scholars have missed: the sense of place that grounded his vision of the beloved community.