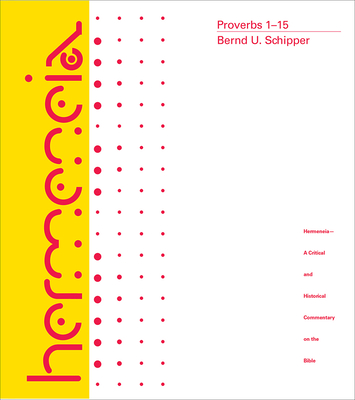 A Critical & Historical Commentary on the Bible)

The book of Proverbs is more than the sum of its parts. Even if some individual proverbs and collections could be older, the overall composition stems from the late Persian or early Hellenistic period. In its present form, the book of Proverbs introduces the scribal student to the foundations of sapiential knowledge and its critical reflection. By discussing different worldviews and contrasting concepts on the relationship between God, the world, and humanity, the book of Proverbs paves the way to both the critical wisdom of Job and Ecclesiastes and the masterful combination of Wisdom and Torah in Sirach.

An equally important aim of this commentary is a detailed exegesis of Proverbs 1-15 as well as an analysis of the overarching strategy of the book of Proverbs as a whole. Taking the prologue of the book in Prov 1:1-7 as a hermeneutical key, the book of Proverbs turns out to be a masterful composition addressing both the beginner and the advanced sage. With its allusions to other biblical texts, including the book of Deuteronomy, the Psalms and the Prophets, the book of Proverbs can be connected to forms of scribal exegesis in Second Temple literature. By using the same scribal techniques as other literati of his time, the scribal sage responsible for some parts of the book as well as its final compilation seeks to provide deeper insight into the complex world of scribal knowledge and sapiential thought.