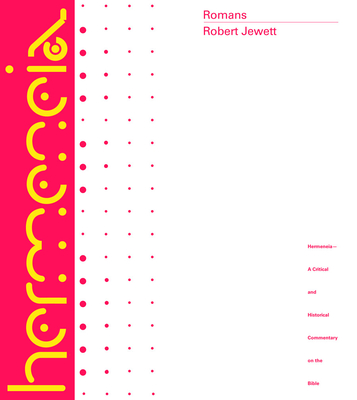 A Commentary (Hermeneia: A Critical & Historical Commentary on the Bible)

Deeply conversant in the full range of questions and interpretations of the letter, Jewett's commentary explores the crucial and controverted passages that have always animated studies of Romans. Jewett also incorporates the exciting new insights from archaeology of the city of Rome, social history of early Christianity, social-scientific work on early Christianity, and the interpretation and reception of Paul's letter through the ages.

Breaking free from abstract approaches that defend traditional theologies, Jewett shows that the entire letter aims to elicit support for Paul's forthcoming mission to the barbarians in Spain. His work specifically focuses on Paul's missionary plans and how they figure in the letter, on Paul's critical and constructive tack with the Roman community, and finally and especially on how Paul's letter reframes the entire system of honor and shame as it informed life in the Roman Empire at the time. The latter remains a pertinent message today. The first commentary to interpret Romans within the imperial context as well as in the light of the situation in Spain, this landmark commentary, twenty-five years in the making, will set the standard for interpretation of Romans for the next generation.