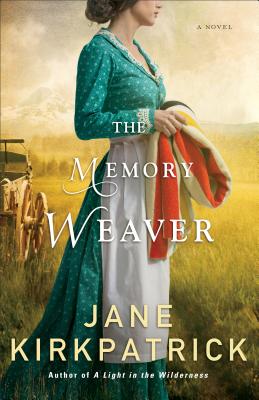 Eliza Spalding Warren was just a child when she was taken hostage by the Cayuse Indians during a massacre in 1847. Now the young mother of two children, Eliza faces a different kind of dislocation; her impulsive husband wants them to make a new start in another territory, which will mean leaving her beloved home and her departed mother's grave--and returning to the land of her captivity. Eliza longs to know how her mother, an early missionary to the Nez Perce Indians, dealt with the challenges of life with a sometimes difficult husband and with her daughter's captivity.

When Eliza is finally given her mother's diary, she is stunned to find that her own memories are not necessarily the whole story of what happened. Can she lay the dark past to rest and move on? Or will her childhood memories always hold her hostage?

Based on true events, The Memory Weaver is New York Times bestselling author Jane Kirkpatrick's latest literary journey into the past, where threads of western landscapes, family, and faith weave a tapestry of hope inside every pioneering woman's heart. Readers will find themselves swept up in this emotional story of the memories that entangle us and the healing that awaits us when we bravely unravel the threads of the past.

Jane Kirkpatrick is the New York Times and CBA bestselling author of more than twenty-five books, including A Light in the Wilderness and A Sweetness to the Soul, which won the coveted Wrangler Award from the Western Heritage Center. Her works have been finalists for the Christy Award, Spur Award, Oregon Book Award, and Reader's Choice awards, and have won the WILLA Literary Award and Carol Award for Historical Fiction. Many of her titles have been Book of the Month and Literary Guild selections. You can also read her work in more than fifty publications, including Decision, Private Pilot, and Daily Guideposts. Jane lives in Central Oregon with her husband, Jerry. Learn more at www.jkbooks.com.
or
Buy Here
Copyright © 2020 American Booksellers Association