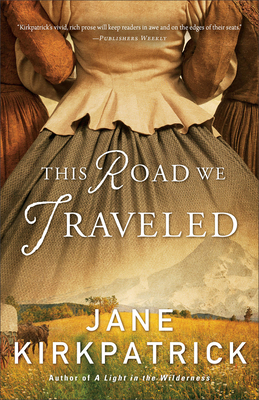 This Road We Traveled

When Tabitha Brown's son makes the fateful decision to leave Missouri and strike out for Oregon, she refuses to be left behind. Despite her son's concerns, Tabitha hires her own wagon to join the party. Along with her reluctant daughter and her ever-hopeful granddaughter, the intrepid Tabitha has her misgivings. But family ties are stronger than fear.

The trials they face along the way will severely test Tabitha's faith, courage, and ability to hope. With her family's survival on the line, she must make the ultimate sacrifice, plunging deeper into the wilderness to seek aid. What she couldn't know was how this frightening journey would impact how she understood her own life--and the greater part she had to play in history.

With her signature attention to detail and epic style, New York Times bestselling author Jane Kirkpatrick invites readers to travel the deadly and enticing Oregon Trail. Based on actual events, This Road We Traveled will inspire the pioneer in all of us.

Jane Kirkpatrick is the New York Times and CBA bestselling author of more than twenty-five books, including A Light in the Wilderness and A Sweetness to the Soul, which won the coveted Wrangler Award from the Western Heritage Center. Her works have been finalists for the Christy Award, Spur Award, Oregon Book Award, and Reader's Choice awards, and have won the WILLA Literary Award and Carol Award for Historical Fiction. Jane lives in Central Oregon with her husband, Jerry. Learn more at www.jkbooks.com.
Loading...
or support indie stores by buying on
(This book is on backorder)