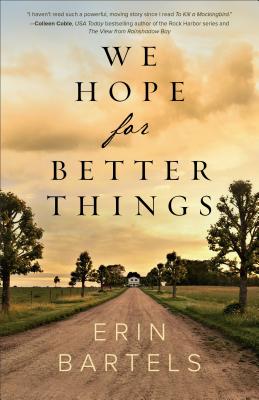 We Hope for Better Things

"A forbidden interracial marriage, an escaped slave, an expectant mother waiting for her Union soldier to return--all of these stories are deftly told by Bartels, as she explores the hard realities of racism and its many faces during various eras of American history. . . .Compelling characters make this winning debut also appealing for fans of general historical fiction."--Library Journal

"Bartels' debut tells the story of three Balsam women, each of a different era, told against the backdrop of racism and violence in America. . . .will appeal to fans of faith-based women's fiction authors like Colleen Coble."--Booklist

When Detroit Free Press reporter Elizabeth Balsam meets James Rich, his strange request--that she look up a relative she didn't know she had in order to deliver an old camera and a box of photos--seems like it isn't worth her time. But when she loses her job after a botched investigation, she suddenly finds herself with nothing but time.

At her great-aunt's 150-year-old farmhouse north of Detroit, Elizabeth uncovers a series of mysterious items, locked doors, and hidden graves. As she searches for answers to the riddles around her, the remarkable stories of two women who lived in this very house emerge as testaments to love, resilience, and courage in the face of war, racism, and misunderstanding. And as Elizabeth soon discovers, the past is never as past as we might like to think.

Debut novelist Erin Bartels takes readers on an emotional journey through time--from the volatile streets of 1960s Detroit to the Michigan's Underground Railroad during the Civil War--to uncover the past, confront the seeds of hatred, and discover where love goes to hide.

"We Hope for Better Things has it all: fabulous storytelling, an emotional impact that lingers long after you turn the last page, and a setting that immerses you. I haven't read such a powerful, moving story since I read To Kill a Mockingbird in high school. This book will change how you look at the world we live in. Highly recommended "--Colleen Coble, USAToday bestselling author of the Rock Harbor series and The View from Rainshadow Bay

"A timely exploration of race in America, We Hope for Better Things is an exercise of empathy that will shape many a soul."--Julie Cantrell, New York Times and USA Today bestselling author of Perennials

"I applaud Erin's] courage, her authenticity, her beautiful turn of phrase, the freshness of her imagery, and the depth of her story that speaks to a contemporary world where understanding is often absent. We Hope for Better Things is a remarkable debut novel."--Jane Kirkpatrick, award-winning author of Everything She Didn't Say

"Erin Bartels's We Hope for Better Things shares the joys and sorrows of three women from different generations. A roller coaster of emotions awaits as you share the lives of these women and hope along with them for better things."--Ann H. Gabhart, bestselling author of River to Redemption

"Storytelling at its finest. Erin Bartels delivers a riveting story of forbidden love, family bonds, racial injustice, and the power of forgiveness. We Hope for Better Things is a timely, sobering, moving account of how far we've come . . . and how much distance remains to be covered. A compulsively readable, incredibly powerful novel."--Lori Nelson Spielman, New York Times bestselling author of The Life List

"There is the Detroit we think we know, and there is the Detroit full of stories that are never brought to the forefront. With We Hope for Better Things, Erin Bartels brings full circle an understanding of contemporary Detroit firmly rooted in the past, with enthralling characters and acute attention to detail. It's a must not just for Detroit lovers but also for those who need to understand that Detroit history is also American history."--Aaron Foley, city of Detroit's chief storyteller and editor of The Detroit Neighborhood Guidebook

Erin Bartels is the award-winning author of We Hope for Better Things (2020 Michigan Notable Book, 2020 WFWA Star Award-winner, 2019 Christy Award finalist), The Words between Us (2020 Christy Award finalist, 2015 WFWA Rising Star Award finalist), and All That We Carried. Her short story, "This Elegant Ruin," was a finalist in the Saturday Evening Post Great American Fiction Contest in 2014, and her poetry has been published by The Lyric. A publishing professional for nearly twenty years, she lives in Lansing, Michigan, with her husband, Zachary, and their son. Find her online at www.erinbartels.com.
Loading...
or support indie stores by buying on