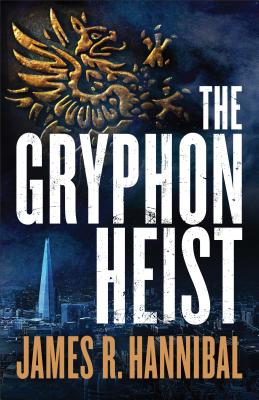 Talia Inger is a rookie CIA case officer assigned not to the Moscow desk as she had hoped but to the forgotten backwaters of Eastern Europe--a department only known as "Other." When she is tasked with helping a young, charming Moldovan executive secure his designs for a revolutionary defense technology, she figures she'll be back in DC within a few days. But that's before she knows where the designs are stored--and who's after them. With her shady civilian partner, Adam Tyler, Talia takes a deep dive into a world where only criminal minds and unlikely strategies will keep the Gryphon, a high-altitude data vault, hovering in the mesosphere.

Even Tyler is more than he seems, and Talia begins to wonder: Is he helping her? Or using her access to CIA resources to pull off an epic heist for his own dark purposes?

In this Ocean's Eleven-meets-Mission Impossible thriller, former tactical deception officer and stealth pilot James R. Hannibal offers you a nonstop thrill ride through the most daring heist ever conceived.

James R. Hannibal is no stranger to secrets and adventure. A former stealth pilot from Houston, Texas, he has been shot at, locked up with surface-to-air missiles, and chased down a winding German road by an armed terrorist. He is a two-time Silver Falchion Award winner for his Section 13 mysteries for kids and a Thriller Award nominee for his Nick Baron covert ops series for adults. James is a rare multi-sense synesthete, meaning all of his senses intersect. He sees and feels sounds and smells and hears flashes of light. If he tells you the chocolate cake you offered smells blue and sticky, take it as a compliment.
Loading...
or support indie stores by buying on