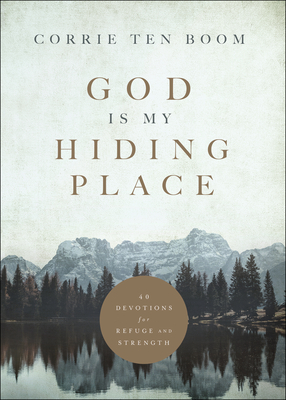 God Is My Hiding Place

40 Devotions for Refuge and Strength

Dutch watchmaker Corrie ten Boom, with her courageous, God-fearing family, sheltered Jews from the Nazis during World War II. This led to her arrest and suffering in prison and concentration camps--told in her bestselling book The Hiding Place (and feature-length ﬁlm of the same name. Her dramatic life story and her more than 40 other books have prepared millions of readers to face their own futures with courage--relying on God's love to forgive, overcome, heal, and restore.

Now, for admirers of Corrie ten Boom as well as a new generation of readers, this 40-day devotional based on Corrie's writings will strengthen your faith, re-root your soul in Christ, and increase your experience of God's peace. Receive the courage and comfort of the Holy Spirit, and remind yourself of what Corrie ten Boom knew and lived: God is your hiding place.

Corrie ten Boom (1892-1983) was born in Haarlem, The Netherlands. After being arrested in 1944 for helping Jews escape the Nazi regime, Corrie spent a year during World War II in prison camps. After the war, she was invited to share her experiences in more than sixty countries and was honored by the state of Israel for her work during the war. Her life story, The Hiding Place, was originally released in 1971. In 1977, she settled in California, where she died in 1983, on her 91st birthday.
Loading...
or support indie stores by buying on