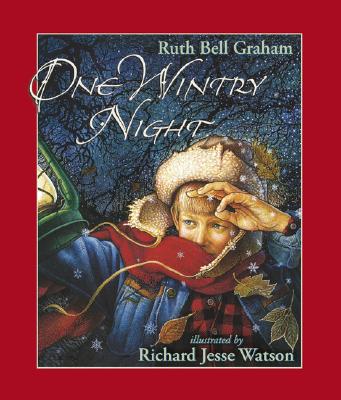 The boy hunkered down and yanked his cap further over his ears as the wind rose to a roar across the ridge. . . . When a young mountain boy is caught alone in a sudden snowstorm, he takes refuge in a cabin his grandfather had helped to build many years before. The woman living there shelters the boy, attends to his badly swollen ankle, and spends the snowbound hours by telling the Christmas story--beginning with creation and concluding with the resurrection. In a magnificent blend of a contemporary setting with the history of God's redeeming love, Ruth Bell Graham has created a wonderful and unique version of the Christmas story. The rich texture of Richard Jesse Watson's illustrations makes One Wintry Night a captivating reading experience and a family treasure. With both instant appeal and an aura of timelessness, One Wintry Night will fascinate both those who have heard the Bible story many times and those who know only a few details. More than half a million copies of this Christmas classic have already been sold. Ruth Bell Graham is a mother, grandmother, and great-grandmother and is the wife of well-known evangelist Billy Graham. She is the author of a number of successful books. Richard Jesse Watson is the illustrator of many award-winning children's books. His recent version of The Night before Christmas was a New York Times bestseller, and his Tom Thumb was given the Golden Kite Award by the Society of Children's Book Writers and Illustrators.