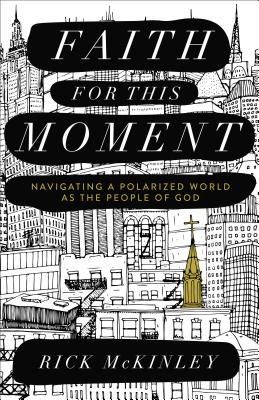 Faith for This Moment (Paperback)

Navigating a Polarized World as the People of God

For three generations, God's chosen people were exiles in the land of Babylon. Today, many Christians in America feel like exiles within their own country, and there is growing disagreement regarding how to live faithfully in this complex cultural moment. Some desire to conquer our Babylon and return to a type of Christendom they believe existed in an idealized past. Others seek to assimilate the values of our culture into the church. And in between are those who are uncomfortable with either extreme, who feel spiritually homeless. These exiles are looking for a new way of understanding what faith looks like in a polarized, pluralistic, post-Christian culture. They want to know: What does it mean to be the people of God now?

That's the question Rick McKinley seeks to answer. He shows exiled Christians how people of faith from other times and places discovered how to live faithfully, prophetically, and imaginatively, neither compromising their principles nor their compassion, and never giving in to despair.

Rick McKinley (DMin, Gordon Conwell Theological Seminary) is the founder and lead pastor of Imago Dei Community and is the author of five books. He is a nationally known speaker at conferences including Q, Catalyst, and The Justice Conference. In 2012, Portland Monthly magazine voted him one of Portland's 50 Most Influential People and he is widely respected as a leader who navigates the issues surrounding faith, culture, and the church. Rick lives in Portland, Oregon, with his wife and four children.
or support indie stores by buying on
Copyright © 2020 American Booksellers Association