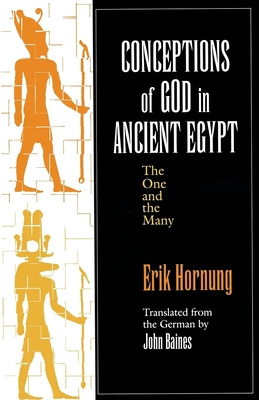 The One and the Many

Osiris, Horus, Isis, Thoth, Anubis - the many strange and compelling figures of the Egyptian gods and goddesses seem to possess endless fascination. The renowned Egyptologist Erik Hornung here studies the ancient Egyptians' conceptions of god, basing his account on a thorough reappraisal of the primary sources. His book, now available in English for the first time, is the most extensive exploration yet undertaken of the nature of Egyptian religion.

Hornung examines the characteristics, spheres of action, and significance of Egyptian gods and goddesses, analyzing the complex and changing iconography used to represent them, and disentangling the many seemingly contradictory aspects of the religion of which they are a part. He seeks to answer two basic questions: How did the Egyptians themselves see their gods? Did they believe there was an impersonal, anonymous force behind the multiplicity of their deities? Throughout, he attempts to evoke the complexity and richness of the religion of the ancient Egyptians and of their worldview, which differs so greatly from our own.

A work of extraordinary distinction, Hornung's book will appeal to anyone interested in ancient Egypt, in ancient religion, and in the history of religion, as well as students and scholars of ancient history, anthropology, and archaeology. Sensitively translated by John Baines and with a new preface by the author, this edition has been amplified and updated with an English-language audience in mind.