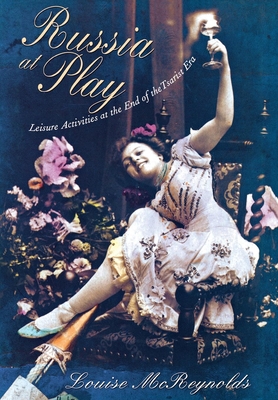 An athlete becomes a movie star; a waiter rises to manage a chain of nightclubs; a movie scenarist takes to writing restaurant reviews. Intrepid women hunt bears, drive in automobile races, and fly, first in balloons and then in airplanes. Sensational crimes jump from city streets onto the screen almost before the pistols have had a chance to cool. Paris in the Twenties? Fitzgerald's New York? Early Hollywood? No, tsarist Russia in the last decades before the Revolution.

In Russia at Play, Louise McReynolds recreates a vibrant, rapidly changing culture in rich detail. Her account encompasses the legitimate stage, vaudeville, nightclubs, restaurants, sports, tourism, and the silent movie industry. McReynolds reveals a pluralist and dynamic society, and shows how the new icons of mass culture affected the subsequent gendering of identities.

The rapid industrialization and urbanization of the late tsarist period spawned dramatic social changes--an urban middle class and a voracious consumer culture demanded new forms of entertainment. The result was the rapid incursion of commercial values into the arts and the athletic field and unprecedented degrees of social interaction in the new nightclubs, vaudeville houses, and cheap movie houses. Traditional rules of social conduct shifted to greater self-fulfillment and self-expression, values associated with the individualism and consumerism of liberal capitalism.

Leisure-time activities, McReynolds finds, allowed Russians who partook of them to recreate themselves, to develop a modern identity that allowed for different senses of the self depending on the circumstances. The society that spawned these impulses would disappear in Russia for decades under the combined blows of revolution, civil war, and collectivization, but questions of personal identity are again high on the agenda as Russia makes the transition from a collectivist society to one in which the dominant ethos remains undefined.

Louise McReynolds is Professor of History at the University of Hawai'i. She is the author of The News under Russia's Old Regime, coeditor with Joan Neuberger of Imitations of Life: Two Centuries of Melodrama in Russia, and translator of E. Nagrodskaia's novel The Wrath of Dionysus, as well as coeditor and cotranslator of Entertaining Tsarist Russia.
Loading...
or support indie stores by buying on