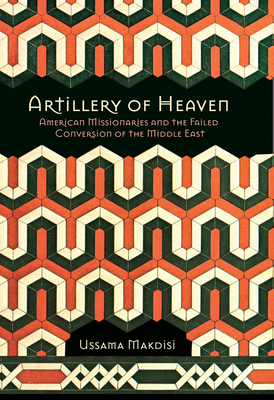 The complex relationship between America and the Arab world goes back further than most people realize. In Artillery of Heaven, Ussama Makdisi presents a foundational American encounter with the Arab world that occurred in the nineteenth century, shortly after the arrival of the first American Protestant missionaries in the Middle East. He tells the dramatic tale of the conversion and death of As'ad Shidyaq, the earliest Arab convert to American Protestantism. The struggle over this man's body and soul--and over how his story might be told--changed the actors and cultures on both sides.

In the unfamiliar, multireligious landscape of the Middle East, American missionaries at first conflated Arabs with Native Americans and American culture with an uncompromising evangelical Christianity. In turn, their Christian and Muslim opponents in the Ottoman Empire condemned the missionaries as malevolent intruders. Yet during the ensuing confrontation within and across cultures an unanticipated spirit of toleration was born that cannot be credited to either Americans or Arabs alone. Makdisi provides a genuinely transnational narrative for this new, liberal awakening in the Middle East, and the challenges that beset it.

By exploring missed opportunities for cultural understanding, by retrieving unused historical evidence, and by juxtaposing for the first time Arab perspectives and archives with American ones, this book counters a notion of an inevitable clash of civilizations and thus reshapes our view of the history of America in the Arab world.

Ussama Makdisi is Professor of History and first holder of the Arab-American Educational Foundation Chair of Arab Studies at Rice University. He is the author of The Culture of Sectarianism and coeditor of Memory and Violence in the Middle East and North Africa.
Loading...
or support indie stores by buying on