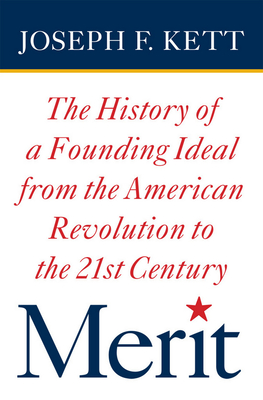 The idea that citizens' advancement should depend exclusively on merit, on qualities that deserve reward rather than on bloodlines or wire-pulling, was among the Founding ideals of the American republic, Joseph F. Kett argues in this provocative and engaging book. Merit's history, he contends, is best understood within the context of its often conflicting interaction with the other ideals of the Founding, equal rights and government by consent. Merit implies difference; equality suggests sameness. By sanctioning selection of those lower down by those higher up, merit potentially conflicts with the republican ideal that citizens consent to the decisions that affect their lives.

In Merit, which traces the history of its subject over three centuries, Kett asserts that Americans have reconciled merit with other principles of the Founding in ways that have shaped their distinctive approach to the grading of public schools, report cards, the forging of workplace hierarchies, employee rating forms, merit systems in government, the selection of officers for the armed forces, and standardized testing for intelligence, character, and vocational interests.

Today, the concept of merit is most commonly associated with measures by which it is quantified. Viewing their merit as an element of their selfhood--essential merit--members of the Founding generation showed no interest in quantitative measurements. Rather, they equated merit with an inner quality that accounted for their achievements and that was best measured by their reputations among their peers. In a republic based on equal rights and consent of the people, however, it became important to establish that merit-based rewards were within the grasp of ordinary Americans. In response, Americans embraced institutional merit in the form of procedures focused on drawing small distinctions among average people. They also developed a penchant for increasing the number of winners in competitions--what Kett calls selection in rather than selection out--in order to satisfy popular aspirations. Merit argues that values rooted in the Founding of the republic continue to influence Americans' approach to controversies, including those surrounding affirmative action, which involve the ideal of merit.

Joseph F. Kett is James Madison Professor of History at the University of Virginia. He is the author of books including The Pursuit of Knowledge Under Difficulties: From Self-Improvement to Adult Education in America, 1750-1990 and coauthor of The New Dictionary of Cultural Literacy.
or support indie stores by buying on
Copyright © 2020 American Booksellers Association