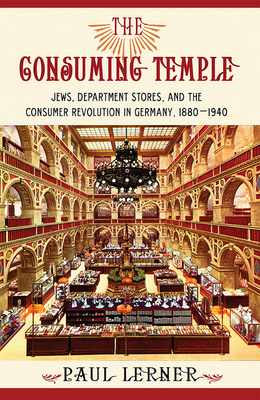 Jews, Department Stores, and the Consumer Revolution in Germany, 1880 1940

Department stores in Germany, like their predecessors in France, Britain, and the United States, generated great excitement when they appeared at the end of the nineteenth century. Their sumptuous displays, abundant products, architectural innovations, and prodigious scale inspired widespread fascination and even awe; at the same time, however, many Germans also greeted the rise of the department store with considerable unease. In The Consuming Temple, Paul Lerner explores the complex German reaction to department stores and the widespread belief that they posed hidden dangers both to the individuals, especially women, who frequented them and to the nation as a whole.Drawing on fiction, political propaganda, commercial archives, visual culture, and economic writings, Lerner provides multiple perspectives on the department store, placing it in architectural, gender-historical, commercial, and psychiatric contexts. Noting that Jewish entrepreneurs founded most German department stores, he argues that Jews and Jewishness stood at the center of the consumer culture debate from the 1880s, when the stores first appeared, through the latter 1930s, when they were Aryanized by the Nazis. German responses to consumer culture and the Jewish question were deeply interwoven, and the Jewish department store, framed as an alternative and threatening secular temple, a shrine to commerce and greed, was held responsible for fundamental changes that transformed urban experience and challenged national traditions in Germany's turbulent twentieth century.

Paul Lerner is Associate Professor of History at the University of Southern California where he directs the Max Kade Institute for Austrian-German-Swiss Studies. He is the author of Hysterical Men: War, Psychiatry, and the Politics of Trauma in Germany, 1890-1930, also from Cornell, and coeditor of The Consuming Temple and Traumatic Pasts: History, Psychiatry, and Trauma in the Modern Age, 1870-1930.
Loading...
or support indie stores by buying on