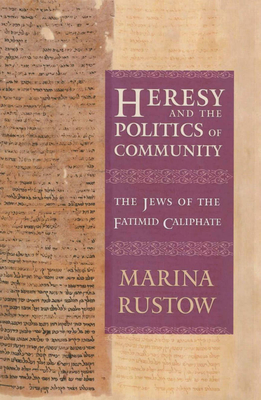 Heresy and the Politics of Community (Paperback)

In a book with a bold new view of medieval Jewish history, written in a style accessible to nonspecialists and students as well as to scholars in the field, Marina Rustow changes our understanding of the origins and nature of heresy itself. Scholars have long believed that the Rabbanites and Qaraites, the two major Jewish groups under Islamic rule, split decisively in the tenth century and from that time forward the minority Qaraites were deemed a heretical sect. Qaraites affirmed a right to decide matters of Jewish law free from centuries of rabbinic interpretation; the Rabbanites, in turn, claimed an unbroken chain of scholarly tradition.Rustow draws heavily on the Cairo Geniza, a repository of papers found in a Rabbanite synagogue, to show that despite the often fierce arguments between the groups, they depended on each other for political and financial support and cooperated in both public and private life. This evidence of remarkable interchange leads Rustow to the conclusion that the accusation of heresy appeared sporadically, in specific contexts, and that the history of permanent schism was the invention of polemicists on both sides. Power shifted back and forth fluidly across what later commentators, particularly those invested in the rabbinic claim to exclusive authority, deemed to have been sharply drawn boundaries.Heresy and the Politics of Community paints a portrait of a more flexible medieval Eastern Mediterranean world than has previously been imagined and demonstrates a new understanding of the historical meanings of charges of heresy against communities of faith. Historians of premodern societies will find that, in her fresh approach to medieval Jewish and Islamic culture, Rustow illuminates a major issue in the history of religions.

Marina Rustow is Professor of Near Eastern Studies and History at Princeton University. She is a 2015 MacArthur Fellow and coeditor of Jewish Studies at the Crossroads of Anthropology and History: Authority, Diaspora, Tradition.
or support indie stores by buying on
Copyright © 2020 American Booksellers Association