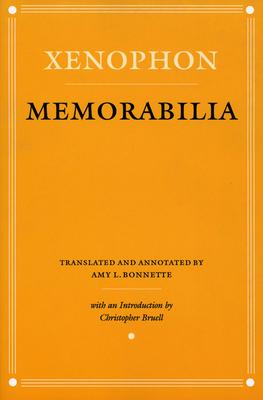 An essential text for understanding Socrates, Xenophon's Memorabilia is the compelling tribute of an affectionate student to his teacher, providing a rare firsthand account of Socrates' life and philosophy. The Memorabilia is invaluable both as a work of philosophy in its own right and as a complement to the study of Plato's dialogues. The longest of Xenophon's four Socratic works, it is particularly revealing about the differences between Socrates and his philosophical predecessors. Far more obviously than Plato in the dialogues, Xenophon calls attention in the Memorabilia to his own relationship with Socrates. A colorful and fully engaged writer, Xenophon aims above all to convince his readers of the greatness of Socrates' thought and the disgracefulness of his conviction on a capital charge. In thirty-nine chapters, Xenophon presents Socrates as an ordinary person and as a great benefactor to those associated with him.