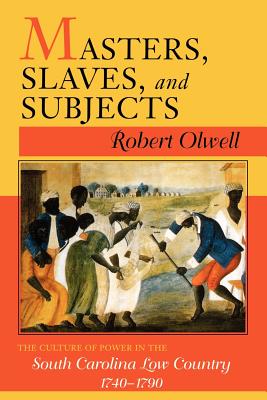 The slave societies of the American colonies were quite different from the Old South of the early-nineteenth-century United States. In this engaging study of a colonial older South, Robert Olwell analyzes the structures and internal dynamics of a world in which both masters and slaves were also imperial subjects. While slavery was peculiar within a democratic republic, it was an integral and seldom questioned part of the eighteenth-century British empire.Olwell examines the complex relations among masters, slaves, metropolitan institutions, officials, and ideas in the South Carolina low country from the end of the Stono Rebellion through the chaos of the American Revolution. He details the interstices of power and resistance in four key sites of the colonial social order: the criminal law and the slave court; conversion and communion in the established church; market relations and the marketplace; and patriarchy and the plantation great house. Olwell shows how South Carolina's status as a colony influenced the development of slavery and also how the presence of slavery altered English ideas and institutions within a colonial setting. Masters, Slaves, and Subjects is a pathbreaking examination of the workings of American slavery within the context of America's colonial history.

Robert Olwell is Assistant Professor of History at the University of Texas at Austin.
Loading...
or support indie stores by buying on