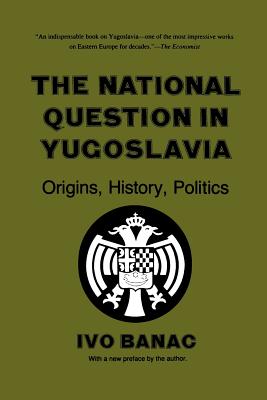 The National Question in Yugoslavia (Paperback)

Even before it collapsed into civil war, ethnic cleansing, and dissolution, Yugoslavia was an archetypical example of a troubled multinational mosaic, a state without a single national base or even a majority. Its stability and very existence were challenged repeatedly by the tension between the pressures for overarching political cohesion and the defense of separate national identities and aspirations.In a brilliant analysis of this complex and sensitive national question, Ivo Banac provides a comprehensive introduction to Yugoslav political history. His book is a genetic study of the ideas, circumstances, and events that shaped the pattern of relations among the nationalities of Yugoslavia. It traces and analyzes the history and characteristics of South Slavic national ideologies, connects these trends with Yugoslavia's flawed unification in 1918, and ends with the fatal adoption of the centralist system in 1921. Banac focuses on the first two and a half years in the history of the Kingdom of the Serbs, Croats, and Slovenes, because in his view this was the period that set the pattern for subsequent development of the national question. The issues that divided the South Slavs, and that still divide them today, took on definite form during that time, he maintains. Banac provides extensive treatment of all of Yugoslavia's nationalities; his sections on the Montenegrins, Albanians, Macedonians, and Bosnian Muslims are unique in the literature. In this unbiased account, all of the principals and groups assume a tragic fascination.When published in 1984, The National Question in Yugoslavia was the first complete introduction to the cultural history of the South Slavic peoples and to the politics of Yugoslavia, and it remains a major contribution to the scholarship on modern European nationalism and the stability of multinational states.