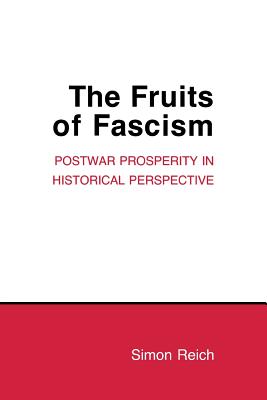 The Fruits of Fascism

The West German "economic miracle," Simon Reich suggests, may be best understood as a result of the discriminatory economic policies of the Nazi regime. Reich contends that ideological and institutional characteristics originating under fascism were sustained despite Germany's return to democracy and heavily influenced the economic success of its automobile industry. By contrast, the liberal economic policies of the British state led in time to the decline of an industrial sector that in 1930 had closely resembled its German counterpart.

Through detailed comparative histories of German and British automobile firms, Reich challenges traditional explanations of the divergent performances of the two nations' economies and sheds new light on the relationship between state policy and economic success in pre- and postwar Europe. Liberal, nondiscriminatory British policies favorable to multinational investment contributed significantly to the decline of domestic firms, he argues, so that eventually multinationals could threaten the health of the entire British economy by investing elsewhere. The Nazi state, however, thwarted the development of American subsidiaries and fostered a core of producers, government officials, bankers, and labor union leaders.

Simon Reich is Professor of Global Affairs and Political Science at Rutgers University, Newark. He is the coauthor of German Predicament and End of Grand Strategy, both from Cornell, and Global Norms, American Sponsorship and the Emerging Patterns of World Politics and coauthor most recently of Good-bye Hegemony!.
Loading...
or support indie stores by buying on