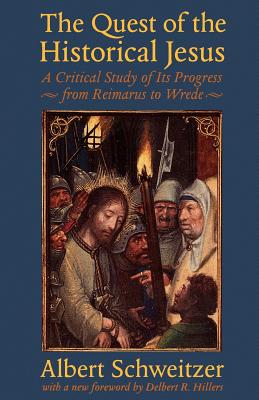 The Quest of the Historical Jesus

In the last decades of the eighteenth century, old arguments about what constituted true Christianity resumed with the newly refined tools and methods of linguistics, history, and comparative literature. The most sensitive questions sought to probe through the centuries and discover the original Jesus. Why, scholars asked, is the New Testament silent about most of Jesus's life? Why didn't Paul say more about the life of Jesus? To what extent was Jesus Jewish? How significant were the differences among the Gospels? What evidence could be trusted and what views justified? As scholars sought to discover and describe what they thought the "true"Jesus might be, they proved that Jesus could be many things.

In this broad survey of the efforts to establish, amend, or deny the historical Jesus, Albert Schweitzer presents the history of a debate about what mattered most to millions of people: If God had entered human history, what could history tell about it? Throughout the course of this heated and prolonged dispute, one retelling of the life of Jesus followed another, enjoying -- in Schweitzer's phrase -- "the immortality of revised editions".

Lesser writers might consider differences of opinion as signs of a hopeless enterprise, but Schweitzer instead finds immense value in the differences. Approaches and conclusions may differ, he concludes, but the quest for the historical Jesus has provided ample testimony to the importance of the effort and the rewards of the experience.

Albert Schweitzer (1875-1965) won the Nobel Peace Prize in 1952. While still a young man he demonstrated extraordinary abilities in a wide range of pursuits, including science, theology, and music. In 1908 he published his magisterial study of the life and works of Johann Sebastian Bach. He studied medicine from 1905 to 1913 at the University of Strasbourg, then founded a hospital in French Equatorial Africa, where he spent most of the remainder of his life. Schweitzer used his Nobel Prize stipend to expand the hospital and to build a leper colony. His bookThe Primeval Forest is also available from Johns Hopkins.
Loading...
or support indie stores by buying on