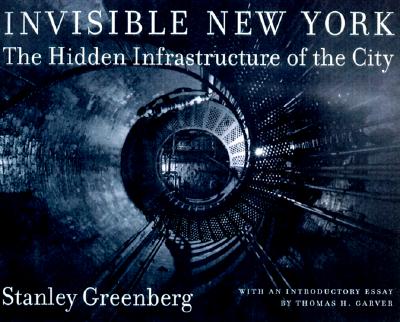 The Hidden Infrastructure of the City (Creating the North American Landscape)

Invisible New York is a photographic exploration of the hidden and often abandoned infrastructure of New York City. Inaccessible and unknown to most New Yorkers, the structures and machinery captured in Stanley Greenberg's luminous black-and-white prints deliver the essential services that a city's inhabitants usually take for granted. Many of these vast and imposing facilities have in recent decades been neglected or fallen into disuse. Others remain intact and in continuous use. Greenberg's dark and poetic images document how a city works, its technological evolution since the 19th century, and the toll that deterioration and years of deferred maintenance can take on the soul of a city.

With a 4 x 5 monorail view camera and using only available light, Greenberg photographed sites in all five of New York's boroughs, many now permanently sealed in the interests of national security. Among the invisible places recorded are the massive valve chambers in the water tunnels 300 feet underground and other features of New York's extraordinary water system; the anchorages of the Brooklyn, Manhattan, and Verrazano Narrows bridges; the dry dock at the Brooklyn Navy Yard; the derelict power station at Floyd Bennett Field; the elegant, turn-of-the-century steam turbine in Brooklyn's Pratt Institute; crumbling ruins on Ellis Island and Roosevelt Island; hidden sections of Grand Central Station and the Cathedral Church of St. John the Divine; the West Side rail yards in Manhattan; the secret Nike missile silos in the Bronx; one of the last remaining manual switch rooms in the New York subway system; the faded grandeur of the City Hall Subway Station, its bronze chandeliers and leaded glass ceilings still largely undamaged; and the vast Brooklyn Army Terminal, once the world's largest warehouse.

Greenberg's photographs of this hidden city uncover long-forgotten engineering feats, magnificent examples of skilled craftsmanship, and fascinating clues about New York's industrial past, as well as reveal the increasing aesthetic apathy of today's builders. His images chronicle both the beauty and the banal necessity of this rich legacy, threatened by public ignorance and bureaucratic indifference. Invisible New York offers a unique perspective on one of the world's great cities and alerts us to the hidden sites and essential facilities found in all cities which are slowly and secretly decaying or disappearing.

Stanley Greenberg worked in New York City government for seven years before becoming a full-time photographer. He has received grants from the Graham Foundation, the New York State Council on the Arts, and the New York Foundation for the Arts. His work has been exhibited at Columbia University and Cooper Union, and is held in several public collections, including those of the Metropolitan Museum of Art, the Brooklyn Museum of Art, and the Los Angeles County Museum of Art. His work was installed in the New York City subway system in 1997 and 1998.
Loading...
or
Not Currently Available for Direct Purchase