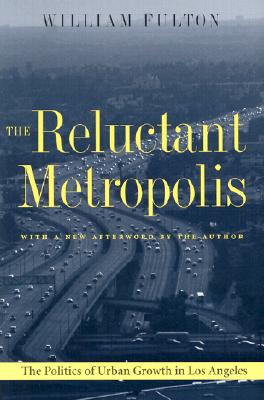 The Politics of Urban Growth in Los Angeles

In twelve engaging essays, William Fulton chronicles the history of urban planning in the Los Angeles metropolitan area, tracing the legacy of short-sighted political and financial gains that has resulted in a vast urban region on the brink of disaster. Looking at such diverse topics as shady real estate speculations, the construction of the Los Angeles subway, the battle over the future of South Central L.A. after the 1992 riots, and the emergence of Las Vegas as the new Los Angeles, Fulton offers a fresh perspective on the city's epic sprawl. The only way to reverse the historical trends that have made Los Angeles increasingly unliveable, Fulton concludes, is to confront the prevailing cocoon citizenship, the mind-set that prevents the city's inhabitants and leaders from recognizing Los Angeles's patchwork of communities as a single metropolis.

William Fulton is an urban planning expert and the editor and publisher of California Planning & Development Report and author of The Regional City: Planning for the End of Sprawl (with Peter Calthorpe), Guide to California Planning, and California: Land and Legacy.
Loading...
or
Not Currently Available for Direct Purchase