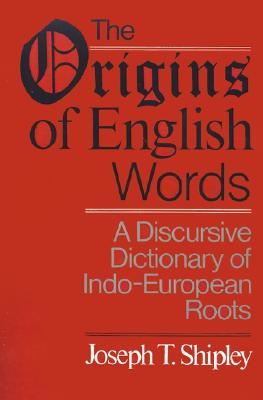 The Origins of English Words (Paperback)

A Discursive Dictionary of Indo-European Roots

There are no direct records of the original Indo-European speech. By comparing the vocabularies of its various descendants, however, it is possible to reconstruct the basic Indo-European roots with considerable confidence. In The Origins of English Words, Shipley catalogues these proposed roots and follows the often devious, always fascinating, process by which some of their offshoots have grown.

Anecdotal, eclectic, and always enthusiastic, The Origins of English Words is a diverting expedition beyond linguistics into literature, history, folklore, anthropology, philosophy, and science.

Joseph Twadell Shipley is the author of the highly acclaimed In Praise of English as well as twenty-six other books, including The Quest for Literature, Dictionary of Word Origins, and Dictionary of Early English. In a long and distinguished career he was president of the New York Drama Critics Circle, was a founder of Yeshiva College, and taught at the City College of New York.
or support indie stores by buying on
Copyright © 2020 American Booksellers Association